Both of those options are perfectly okay, but both make teachers and students feel a bit uncomfortable.  Without teaching any test prep, we worry that students won’t be able to “figure out” questions. Students feel nervous not knowing what to expect and want to feel confident going in. But too much test prep stresses out the teacher and the students, putting tons of pressure on them as they go into a testing situation.

I propose some test prep (for math anyway) without the pain of these feelings.  I came up with Reasoning Puzzles when we first began teaching with the Common Core State Standards.  As I looked at our state test, last year I realized the rigor has most definitely increased, especially the ability for our students to take apart questions and look for multiple solutions and answers.

Instead of flashing up multiple choice questions, students participate in small group discussion about “puzzles”and statements about those puzzles. Allowing them to talk over these puzzles, and make their mathematical thinking visible to each other, they become much more confident.  Testing truly is just trying to make sense of a problem, and looking for small nuances in how the question is asked, combined with calculations of some sort. This sort of test prep is fun, builds confidence in your students, and if done all year can create very powerful mathematicians.

I used them with my own third graders for years, and now with my intervention students.  I received a tweet from a woman named Lisa who took it even a step further and had her students write their own statements. What a great way to extend the learning! 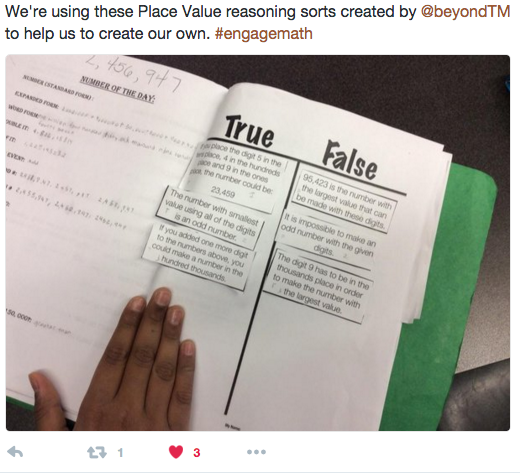 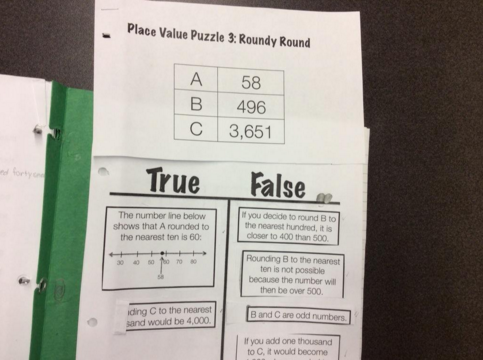 Reasoning Puzzles give students a chance to think critically and to use the standards for mathematical practice effectively.  Feel free to check out the free sample to try them yourself if you’d like. 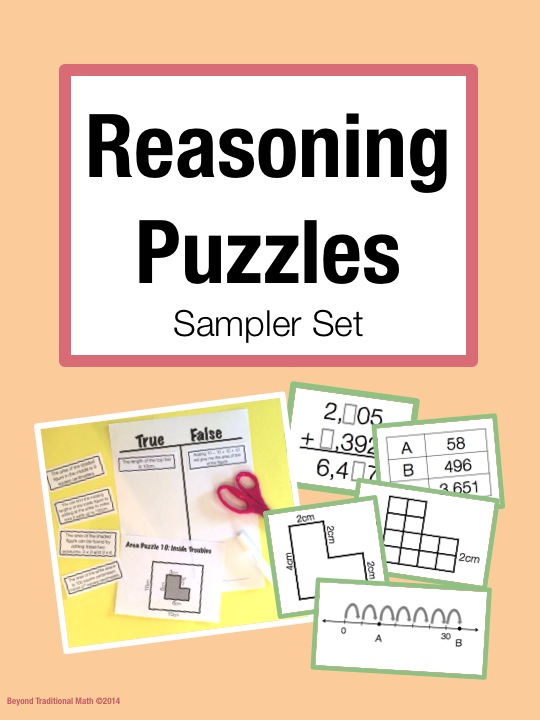 A friend of mine forwarded his child’s math homework to me the other night. His son is a third grader at a great school in the community in which I live.  His son’s homework had a problem like this, and both the father and son were at a loss for how to solve it. 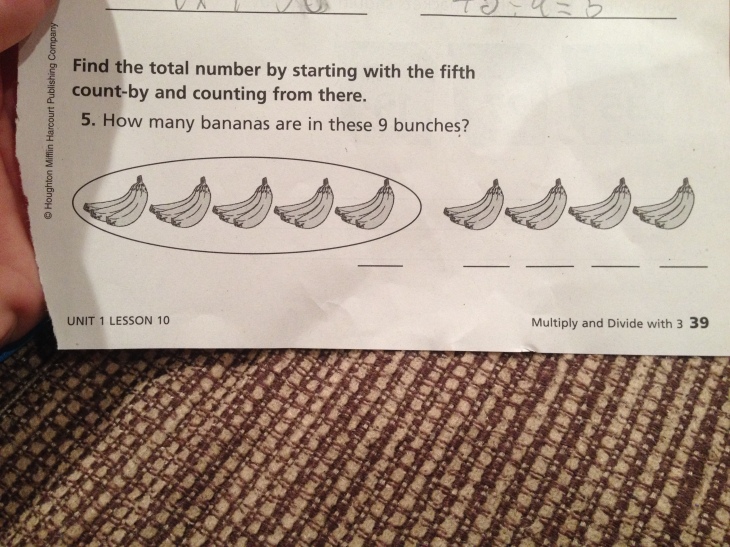 Parents having a hard time understanding Common Core Math need support from educators as we make the shift together.

There are a few important things to note. Number one, the amount of attention “New Math” and “Common Core Math” has received in the media has been non stop and very negative. This leads to parents feeling frustrated with schools for not communicating this new shift in mathematical thinking. In some ways, this is a failure on our school system, but in other ways it is a lesson to not always believe everything we read/see in the media. Much of the information out there is false.  For example, many parents ask me, “Why don’t you just teach the traditional algorithm?” We do teach it, but we teach a whole lot of understanding before introducing it so they don’t have to memorize a meaningless set of procedures. Luckily this father is open minded since he did not have a great experience with math himself as a child, and he wants to do his best to learn along with his child.

The other thing that is so common when parents are frustrated with Common Core Math, is that they haven’t been taught to think of math as a problem to solve, as a puzzle. Instead they look at it from the angle that there must be only one way. How can you blame them when they were taught math this way? It isn’t their job to learn this new shift in thinking without any support from us. We all go back to what we know, and what they know is that they were taught to memorize. This same attitude is common for children in their math classes as well because teachers are trying to shift to deeper thinking activities for our students.  (Sadly, math curriculum/textbook companies in the U.S. is not there yet.) This is a HUGE shift that will take time!

So in the meantime, let’s work together with our parents about math. Actually it doesn’t matter if your school has adopted Common Core Math at all, these are positive messages for ANY parent. Let’s tell them:

By the way, here is how I thought about that problem above. If you thought about it a different way, I’d love to know your solution! 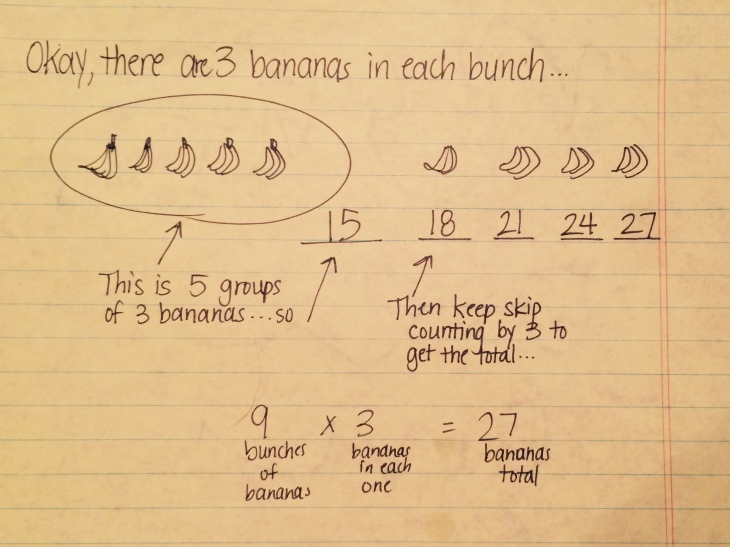 Parents, keep on advocating for you and your child.  We need to know if you don’t understand, and we can all make math meaningful if we learn together. What other positive messages would you like to tell parents so that we can work together?

With all of the current criticism about the CCSS and “Common Core Math” (I put that in quotes because that phrase has been driving me crazy, now that is another blog post in my mind), I’ve been happy to see that the Standards for Mathematical Practice have been left alone.

I’m glad that they’ve been left alone in the criticism because the Math Practice Standards are all encompassing thinking habits, more than they are standards to be met.  They encourage us to teach mathematics more as a learning subject than a performance based subject. Math absolutely should require lots of messy critical thinking, deduction, discussion and reasoning.

Someone last year said/asked me, “I just don’t understand what these standards are for.  What are they?” I explained them the best way I could, since I had just spent a month researching them to know them better:

We’ve had math coaches, administrators and other teachers pass out posters to put up in our classrooms. We’ve seen freebies and posters that we are meant to download and print. We’ve put them up on our walls with very few of us digging in to what they actually mean. I WAS one of those people. I had a poster of the kid friendly standards up for two years, and it wasn’t until last year that I realized one of the standards was completely inaccurate on the poster.  I had never bothered to check, and I assumed that the source knew the standards.  Can you blame me? I didn’t have the TIME to dissect what each one means.  It felt like another thing…another plate to spin…another added responsibility. I truly didn’t understand the importance of the standards to create a culture.

When I decided to figure out what they really mean, introduce them to my students from the start of the school year, work through the problems with them, and embed the language in the classroom, the culture really changed. We became mathematicians who could work through anything. It was remarkable. We put our work on the walls to help remind us that these were to be a part of our classroom daily.  We truly became vicious problem solvers, we worked together and math was about learning.  Math became FUN.

After a month of research I created posters, problems and activities to help myself understand them, but also to help teachers understand them, too.  (Feel free to check out the preview which walks you through the first standard.) 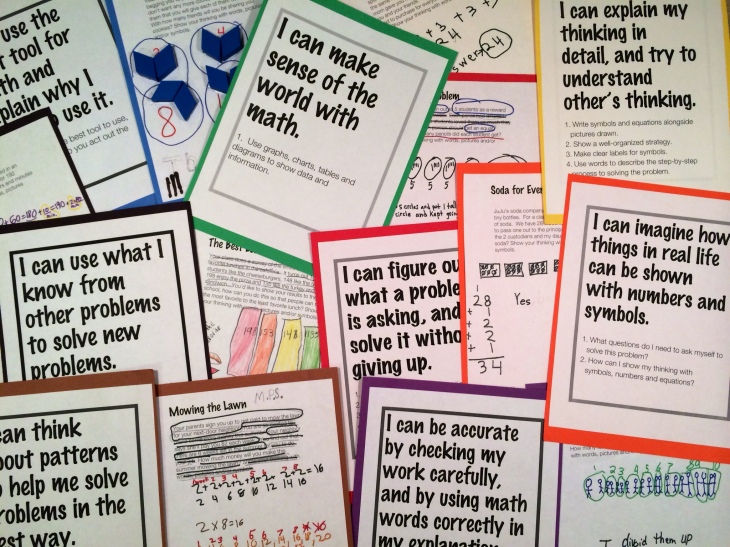 Build a culture by introducing, working with and revisiting the Standards for Math Practice.

Even if the Common Core goes away (which it most certainly will, and already is in many states), I will always keep the Standards for Mathematical Practice.  It is a foundation in which we can all build upon, year after year!

Did you know that there is not a “math gene” that makes us good at math? If you haven’t read this yet: Why Do Americans Stink at Math? I would highly suggest taking the time to read.  The long and short of it, is that during the industrial revolution, we took the fast track and tried to teach math the fastest way possible.  We taught shortcuts instead of conceptual understanding.  This method of teaching allowed our students to go directly from their education into a factory job, but it did a great disservice to a generation.  This is why people believe that they are “bad at math”.

The world has changed and we can no longer do this to our students, but according to the article above we still are.  Despite many attempts at changing our math practices, we still find the majority of U.S. teachers using traditional methods. Of students attending 2 year colleges, 60% of them are placed in remedial math classes, and only 25% of those students pass those classes! (Silva & White, 2013)

I would strongly recommend that you watch this video by Jo Boaler, of Stanford University. It is 20 minutes long, so if you can’t watch it all, try the first 8 minutes.  In it she talks about how we need to make math a learning subject (exploratory, messy, open ended and challenging), not a performance based subject (math is only about answering questions correctly).

To return math to being a learning subject, we can use rich open ended tasks, inquiry activities, real world projects and problems that encourage math talk and discourse!  Please check out my free Reasoning Puzzle Set to try out an activity that will really get your students thinking and talking and most importantly, learning at high levels. 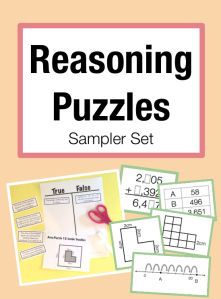 These are most appropriate for 3 and 4th graders, but even could be beneficial for fifth graders that are not used to thinking this way!  If you end up using them, I’d love to hear how it goes.