Swear words (in bold below) in any math class of mine include:

Yesterday as we worked on Puzzle #7 in Piles, I had a fourth grader swear. Very strongly.  It was because she got the card (3×3)+(4×3).  She was convinced that she would not be able to find a match for it because she didn’t understand the number sentence.  So she guessed and just put the card “twenty-four” underneath it.  I asked her to prove it, again at which point she swore that it was too hard.  She then continued on saying that it made no sense to her and almost burst into tears.

This is the beauty of working with students who struggle. It’s all about asking the right questions to pull them out of what they feel is total despair and helplessness.

So all I did is put out a bag of square counters.  I asked her and the other two with me to build it. I told them I won’t tell them the answers, but that there were things we could do to make sense of the problem. I asked them to talk to each other to see if they could figure out a place to start.  Then, right before my eyes they began to build this: 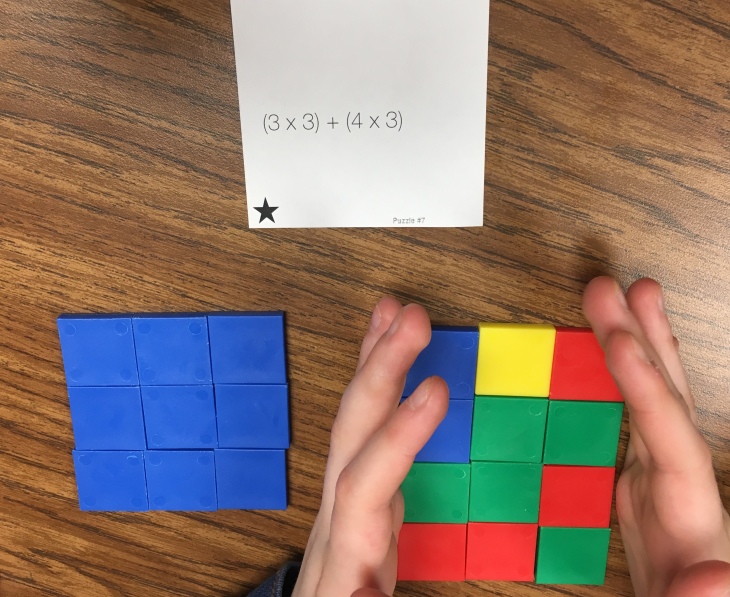 We have to help our youngest mathematicians see their way out of the fog of not knowing where to start.  I think this is true of every level of learner.  At that moment, I was no longer needed. They began to do this one:

I was beginning to feel a little useless, which I think means a job well done.

I have referred to the Concrete-Representational-Abstract instructional approach many times before, but I will say it again. This is research. This is how students brains WORK.

If you don’t already know about this approach, here it is in a nutshell:

If we pull the tools before they are able to represent a math concept, how can we expect the abstract number sentence to make sense?  I love that Piles is allowing these students to connect all three.  Soon, I anticipate the tools staying in the bag as they begin to visualize what multiplication means, and hopefully their foul mouth swearing will stop.